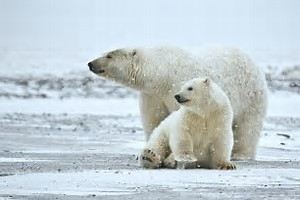 Hey everyone! Welcome back to another Studnet Blogging Challenge Post. I am going to talk about polar bears because they are endangered.

Polar bears are one of the largest species of bears. Males can grow up to 10 feet when standing up on their legs. Brown bears are the ancestors of polar bears from about 200,00 years ago. Polar bears do not have write fur, they actually have clear, hollow tubes filled with air. A group of polar bears is called a pack or a sleuth. They don’t hibernate even though they have brown bear roots.

Polar bears can be found in the Artic Circle, Canada, the U.S., Greenland, Russia, and Norway. They don’t have natural enemies, they are friendly!  Polar bears can swim up to 6 miles per hour. In fact, their name means sea bear. When polar bears, aren’t hunting, they are resting from up to 20 hours a day. Polar bears have “built-in socks” which is just stiff fur on the sole of each foot to prevent them from slipping on ice.

The biggest threat to polar bear is climate change. Rising global temperatures means that the sea ice will melt and forming leaving the polar bears less time to hunt for food.

That’s all for this post! I hope you guys enjoyed it. Comment down below what you know about polar bears. I’ll see you all later. Bai! 😄